I began with only one and given my propensity to kill houseplants, I never expected that one to last long. But it did. Then it gained a mate. But I’m getting ahead of myself.

My mother had a green thumb. She loved plants and she surrounded herself with them. Pots and planters filled her home, upstairs and down, inside and out. She knew how to take cuttings and turn them into new plants. We might be walking somewhere and Ma would spot an interesting plant. In an instant, her hand would dart out like a cobra, pinch off a tiny piece of the plant, and disappear back into her coat pocket. In a matter of weeks, the same type of plant would be growing in her collection. My sisters were afraid she would get in trouble for this, but Ma would just look at them and smile.

At some point, my mother’s horticultural interests expanded to include cactus plants and before long, all manner of cacti began to appear—not from pinching off samples, I’m sure. By the time my parents had reached their golden years, every windowsill in their basement was lined with mismatched pots brimming with these needly things. Some of the more interesting cacti joined her other plants in the kitchen, dining room, living room, and porches.

A few years before my mother passed away, which was in 2006, she gave me one of her Christmas Cactus plants, assuring me that these things were not that easy to kill. What can I tell you, this woman knew her son. Turns out she was right. The darned thing seldom threw blooms—sometimes going for months or even years—but when it did, its red flowers were beautiful to see.

Over the years, “Ma’s cactus” continued to grow and thrive, but after my mother died, it would go for very long periods of time without blooming. That pattern abruptly changed, however, when my father died in February of 2011. Within days of his passing, my mother’s cactus erupted, throwing more beautiful red blooms than it had ever done for me in the years prior. Having no better explanation for this phenomenon, I took the shower of blooms as a message from my mother, sent to assure me that Pop was with her once again.

When the time came for my sisters and I to sell our parents’ home, decades worth of physical belongings had to be sold, donated, disposed of, or taken home. One of the things I took home was another Christmas Cactus. This specimen wasn’t quite the same as the one I already had. It seemed more rugged somehow and the flat, spiney segments were shaped just a little bit different from those of my other plant.

I wanted to keep the two cacti side by side on top of a wooden pantry in my kitchen, where they would not easily be reached by Jazzy, the family cat. But I didn’t much care for the mismatched flower pots, so I went out and bought a pair of matching ceramic pots, large enough for each plant to grow into. Once transplanted, the two quickly adapted and within a few weeks, began to flourish.

That’s when  funny thing happened. Ma’s cactus, threw a few of her red blooms—but only on the side nearest the new arrival. Hmmm, interesting.

A couple of days later, the other cactus began to throw beautiful, yet different, white blooms. Both plants then continued to bloom, each in its own color, until finally reverting back to their usual, quiet selves.

This happened several more times in the years that followed, most often around Christmas or Easter. In time the two Christmas cacti came to represent my parents, at least in spirit. The “Ma” plant has always had more going on, growing in different directions and always throwing more blooms, and yet she is the softer of the two plants. Her spiny segments have always been more delecate and they are quicker to droop if neglected. By comparison, the “Pop” plant is sturdier and grows its woody parts just as much as its flat segments. Like my father in life, this plant holds a grudge. If neglected, this one will let sections die off rather than come back when watered again. He also doesn’t bloom as often, but his soft, white blooms are more delicate and short -lived than her prolific red ones.

And so it goes. Just this past week, with Christmas approaching, Ma threw a handful of red blooms, most of them in the direction of the strong, silent plant beside her. Pop, on the other hand, hadn’t bloomed once in over a year—until a day or two ago, then a couple of tiny white buds appears on the tips of two appendages closest to the beautiful plant to his right.

I observe the banter between these two plants and remember many happy times and the colorful chatter that often took place in our household, especially during the holidays. 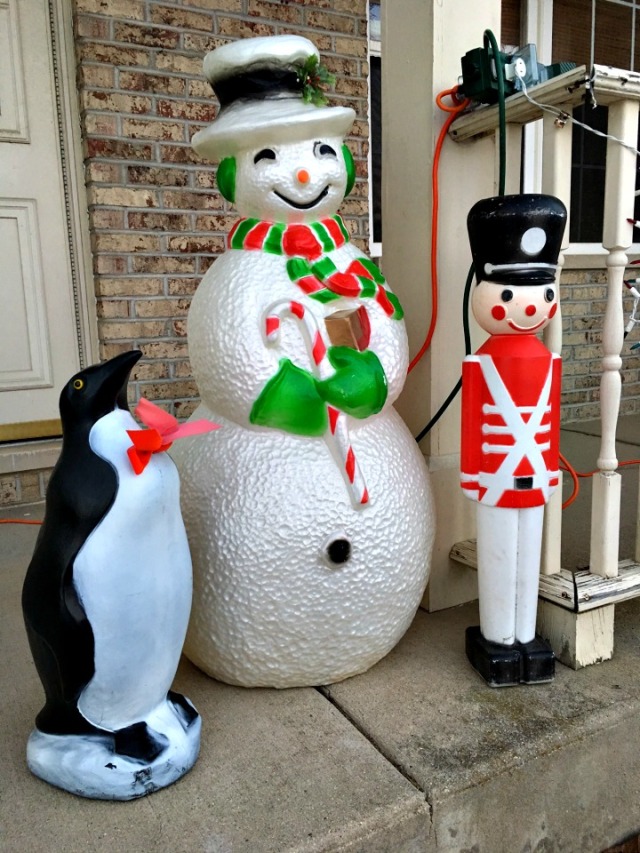 We’ve had this plastic snowman since the kids were little, which means it’s been a while. He stands on our front porch from sometime after Thanksgiving through New Year’s Day. He lights up after dark by means of an incandescent light fixture glowing from within his hollow body. Some of his painted features are now worn and faded. I no longer recall where we bought him, but he hadn’t cost a lot. Our snowman used to have a pipe in his mouth, but it broke off. That might have happened the night he attacked me, but I don’t think so.

Oh, haven’t I told you about that? Yes, it’s true. I wouldn’t have thought it possible, but the little bugger came at me one night, when I wasn’t expecting it. The whole ordeal was rather violent and caught me completely off guard. I mean look at him; he’s a four-foot tall molded plastic snowman and they are generally considered to be a benevolent sort. I don’t believe anybody else would have anticipated his violent outburst any more than I did.

The incident happened four or five years ago on a cold, winter night. A winter storm had passed through our area, dropping four or five inches of new snow. Once the snowfall had stopped, as the temperature began to fall, I suited up and went outside to clear our driveway and sidewalks. I rolled my trusty two-stroke snowblower out of the garage, threw the choke lever over, turned the key, yanked the starter cord and stood up with a look of great satisfaction as my machine roared to life. I squinted slightly as I leaned forward into a cloud of blue smoke to push the choke lever back over. The engine settled into a stable growl, which escalated to a controlled roar as I began to clear rows of snow.

I remember adjusting the directional chute as I moved along the curved sidewalk leading to my front porch, which was well lit, not only by the usual area lighting but also by the strands of Christmas lights, which my beloved wife and teenage daughter had strung up across the porch roof and front rail, and of course from our plastic snowman. He stood at the edge of the concrete porch, smiling at the world around him and glowing brightly from within.But an instant later, as I approached, his demeanor changed.

As the snowblower and I moved ever closer toward the snowman, he grew agitated, literally. First the little guy began shuddering and then rapidly shook from side to side as if having some sort of seizure. I stared at this amazing site for an instant, not yet comprehending the situation at hand.

Suddenly and without further warning, the snowman lept from his place on the porch, sailing through the air, straight for me and my snowblower as his pleasant glow from within changed to a brilliant white flash before going out completely. Startled, I released the engagement lever on my snowblower as the snowman crashed into us and then lay on the ground before us in total, dark silence. My heart beat like a triphammer as I stood there, piecing together what had happened.

My eyes traced the remnants of a slender electrical cord leading from the snowman’s backside not toward an electrical outlet up on the porch, but toward the intake of my snowblower. For whatever reason, instead of plugging the snowman directly into the outlet behind him, my decorating team had run his little cord out to a four-outlet temporary fixture on a stake in the front flower bed, which in turn was plugged into the outlet just outside our front door. Somehow, perhaps during the course of the snowstorm, a portion of the snowman’s electrical cord had strayed onto the sidewalk, only to be spooled up by the paddles of my snowblower. Good heavens, I’d all but disemboweled the little guy!

I did my best to hide my shocked, sorrowful state by laughing uncontrollably at the memory of being attacked by our plastic snowman. I spent no small amount of time freeing the stripped, stretched and broken electrical cord from the snowblower’s intake. And in the days that followed, I spent more time acquiring and installing another incandescent light fixture inside of my little friend.

Before long he was back out on our porch, glowing from within as usual, and he has done so ever since. We tend to be a little more careful these days about where we run the electrical cords when we put up Christmas decorations. I can’t help but smile whenever I think back on that incident. This usually happens while I’m removing snow from the front walks during the holiday season.

Just last weekend, for example, I was clearing several inches of snow for the first time this season. As I came along the front walk toward our house, I glanced at the little snowman and smiled. A moment later, as I turned to pass in front of him, I was certain I heard him utter a derogatory remark about the legitimacy of my birth. I can’t imagine he would still bear a grudge against me after so many years, especially after I took such care to restore his innards, but one never knows.