I had hinted about doing this back when I wrote about our last cooking endeavor (see Cajun-Midwestern Fusion). With spring being a little late to arrive, Ann and I figured we had one more cooking opportunity before riding season really gets underway. So we sorted through countless recipes, favoring Mediterranean influences this time, and selected three dishes to make for our supper (click on each to see the original recipes and ingredients):
• Bacon, Avocado, & Brussels Sprout Salad With Lemon Vinaigrette
• Chicken Spinach Feta Pie
• Roman-Style Stuffed Artichokes 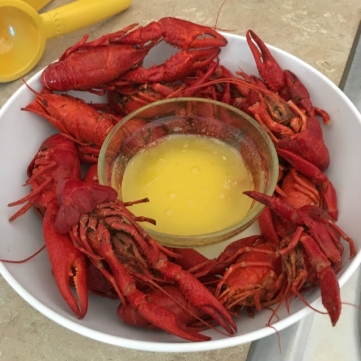 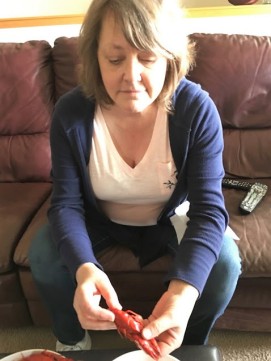 But before we got into that, Ann served up a light lunch that reminded me of the Cajun cooking day we had enjoyed last month. Apparently one of Ann’s local supermarkets had brought in a sizable shipment of frozen, pre-seasoned crawfish. I’d eaten breaded and fried crawfish tails a few times, but neither Ann nor I had never done the break-em-open-and-eat-the innards thing before. She steamed them up and served them with melted butter in addition to a batch of the same spicy remoulade recipe we had made last time. I’m glad Ann and I shared this new and interesting experience together but in all candor, I prefer nibbling the deep-fried tails. 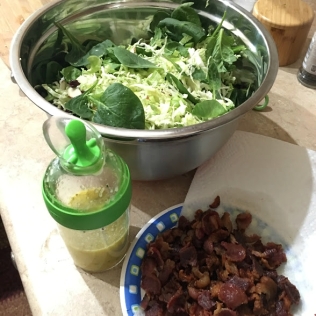 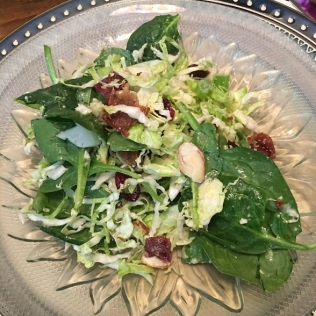 Raw, shredded Brussels sprouts and baby spinach formed the foundation for this particular salad, which we selected because it didn’t share too many ingredients with our other dishes, but also because Ann and I seem to have developed a thing for Brussels sprouts over the past year. We were not disappointed. The combined ingredients deliver big on flavor and textures. In the future, we might depart from the recipe slightly. The avocado seemed to get run over by everything else and so could be considered expendable. And although the lemon vinaigrette was quite good, a poppyseed dressing may complement the flavors even better. To be determined. 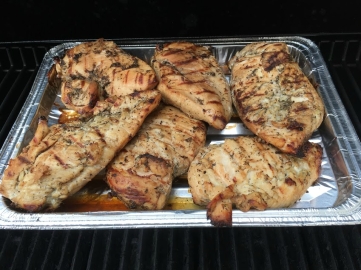 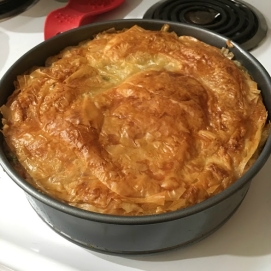 What do you get when you combine ricotta, feta, and Parmesan cheeses with spinach, chicken and more, all baked in a phyllo crust? I regret that I didn’t start shooting photos until our chicken spinach feta pie had already been assembled and baked. The preparation is somewhat involved, yet kind of fun. On this one, however, we deviated from the recipe before I had even arrived. Rather than season and pan fry the chicken breasts, I marinated them a day in advance and then grilled them to perfection the night before I drove up to Ann’s place. By doing this, we turned up the volume on that chicken considerably, I think for the better.

Have you ever worked with phyllo dough? We hadn’t, not before this, and we learned something about it in the process. Once you take the sheets out of their packaging, you’ve got minutes to bathe them in butter or otherwise do something before they become as frail and brittle as dry leaves. But when handled properly, there is no substitute for the light, layered, buttery, flaky magic that results.

Given all the stuff that went inside that pie, we really weren’t sure what was going to happen when Ann released the spring-form pan after baking. Would it self-destruct, sticking to the pan and oozing cheese-infused spinach all over the place? Nope. After allowing the contents to cool and set, the entire pie came out intact and retained its shape, even when sliced. The flavor profile was awesome! Just one amendment going forward, the recipe calls for concentric circles of chopped tomatoes, onions, and olives just beneath the top crust. After eating our respective slices, Ann and I agreed that we would combine those three ingredients into a medley, such that the resulting layer delivered a consistent flavor explosion across the entire pie. 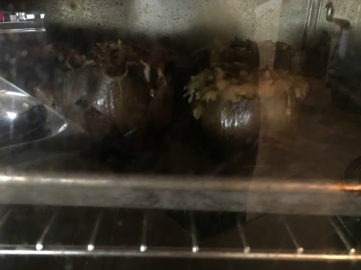 I am a fan of stuffed artichoke hearts. My middle sister Anna has made them for years and I have always enjoyed them. Interestingly enough, Ann and I replicated her recipe almost exactly one year prior to our most recent endeavor, with good results. This time around, we wanted to try using fresh, whole artichokes, a daring endeavor to be sure. The results? Whole artichokes make for a more formidable presentation over canned hearts—think large, stand-alone pieces versus a casserole—but what you gain in appearance, you more than lose in labor and waste. Truth be told, my sister’s casserole has better flavor and texture. But again, we wouldn’t know this had we not tried and as always, we had fun throughout the process. There is no substitute for a kitchen filled with love and laughter.

A few final thoughts. First, given the characteristics of this meal, I wanted to select a light-bodied, dry wine to balance it off. We went with an inexpensive Pinot Grigio (Fossetta) from Venice, Italy. Crisp and fruity, yet dry, this wine seemed to serve our needs.

Second, I have presented these three dishes in the order in which Ann and I both enjoyed them most. That salad was our hands-down favorite. It was light and brimming with flavor and texture. Sure, we would change things up a little if and when we make it again, but as built, this first-course dish was just fine. The pie was our second favorite. Plenty of flavors there, even if we hadn’t used grilled chicken (but I’m glad we did). It’s a rich dish, though, and that one pie could have fed up to eight people. Luckily, the leftovers are at least as good as the first time around. The artichokes tasted fine, but in the end, we deemed them to be too labor-intensive for what we got out of them, especially when compared to the tried-and-true casserole version that we’d made before.

Finally, speaking of labor-intensive dishes, all three of these involved a fair amount of cutting, chopping, mincing, grating, etc. That’s not necessarily bad, especially if you enjoy being in the kitchen. But if you are looking for quick and easy meals, these are not the dishes you seek.

It may be a while before you see another “Ann and Michael cooking” post, as once the weather warms up, we tend to go riding when we get together—and I do so enjoy sharing those excursions here. On the other hand, Mother Nature has been a little unpredictable lately, so we’ll just have to wait and see what happens.

Until then, as always, thanks for hanging with me.