My first time was June 5, 2005. It was a Sunday. I had recently purchased a Honda ST1300 sport touring rig—my second-ever bike and the first one I’d bought new—and had taken it up to Road America in Elkhart Lake, Wisconsin to see the AMA Superbike races. My wife and two then-small children had come up in the family minivan for the weekend. We had a great time together, but when Sunday came, I had in mind to linger a bit while they took the fast way home.

After having eaten a terrific breakfast at Schreiner’s Restaurant, which is somewhat of an institution in Fond du Lac, I kissed my family goodbye and they headed west to the Interstate as I headed east, to a county road that would take me through the Northern Unit of the Kettle Moraine State Forest.

Despite having been on a new motorcycle, bought less than a month earlier, with which I was less than 100% at ease, I had so much fun running the Scenic roads of the Northern Unit, I came very close to turning around and running the exact same roads a second time. 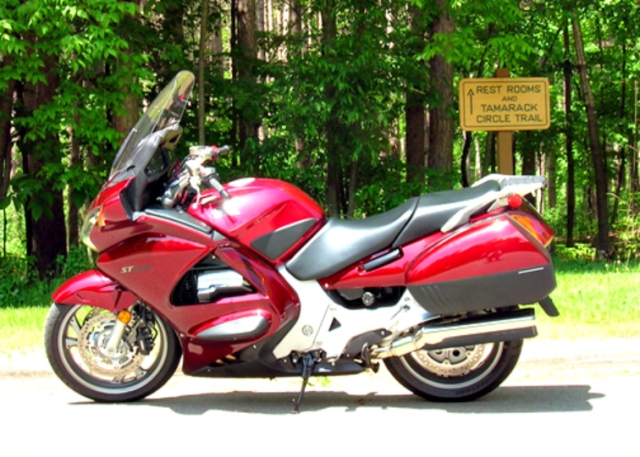 At some point during my ride, I’d noticed a turn-off to some sort of local office/station. There wasn’t much there, as the office itself was closed Sundays and there were precious few, if any, people at this particular time and place. The quiet solitude was rather soothing. After walking around a bit, I pulled my motorcycle around to this spot in front of a sign intended to guide folks to a local trail head and some restrooms.I took a photo and moved on. 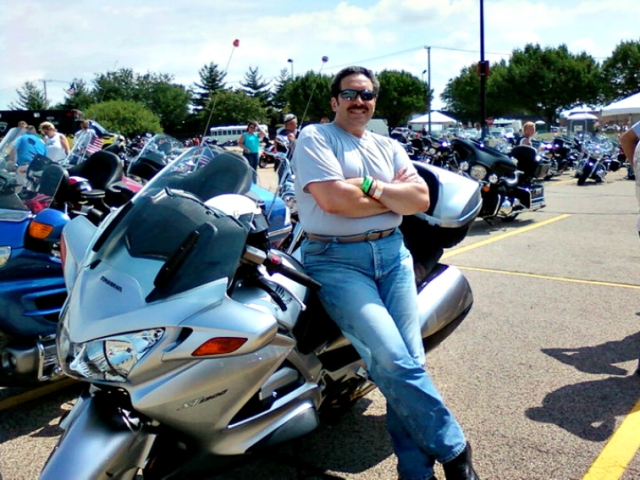 In the years that followed, I stopped a few more times, occasionally retaking the same photo, just for fun. Apparently i did not take one there with my ’07 silver ST1300, but I’ll never forget stopping there with it on a cool, gloomy, drizzly Sunday. My son was riding along on his first motorcycle, a ’94 Kawasaki Vulcan 500. It had been his first overnighter on his own bike and having been just a little ill-prepared for what Mother Nature dished out to us that weekend, he was freezing. Another friend and frequent riding companion, himself a seasoned motorcycle traveler, was with us.

Leading our little group along a scenic stretch of Highway 67, I turned off at the same spot and once we had come to a stop in the little parking lot, my son glanced around and inquired, “Why the heck are we stopping here?”

“I’ve been here before,” was the only explanation I could come up with. My shivering son looked at me as if he suddenly realized that his father had just lost the last of his marbles. I looked back at him and smiled. “Someday you’ll get it.” Then I added, “Now put your rain gear on. It’ll block the cold air and keep you warmer for the rest of our ride.” He did so and discovered that his old man could be right about some things. 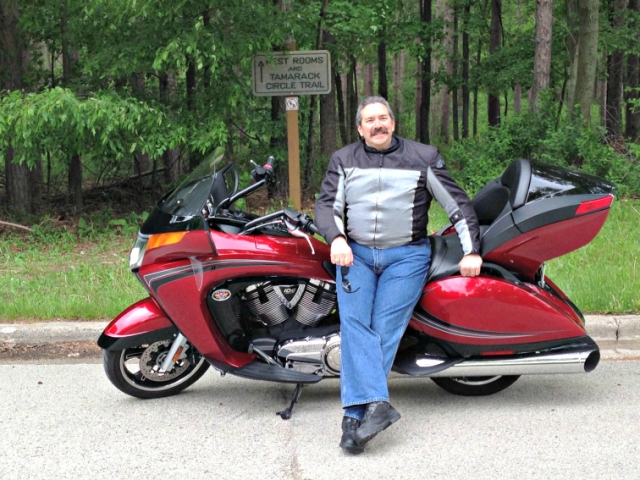 Our trips to the AMA races became a regular thing for John and me, and every so often, we would take that same road and stop in that same little clearing.The only thing different was that after that, my son got it. He never questioned that stop again. He even took the photo a couple of times, so that I could be in it with my bike.

This past June we attended the AMA races again, just John and me, and on our way home,via the scenic route, we pulled into that place once again. John was grinning from ear to ear as I positioned my bike in front of the wooden sign and inquired, “Would you do the honors, please?” He was only too happy to oblige because he gets it now. This photo moment has become a thing of mine, just as these annual trips to Fond du Lac and Road America have become our thing.

As I look at these photos, I see that the trail head sign has changed colors over the years, as has my hair. Thanks for hanging with me.