I was surprised when my phone dinged one Friday evening in late September, alerting me to an unexpected text from my friend Mark.

“I don’t have a plan… Whatchagot?”

“Nothing except looks to be an exceptional day to ride.”

Mark and I are both seasoned motorcyclists who appreciate how quickly the riding season can conclude as the fall season progresses toward winter. We texted back and forth a few times, sharing possibilities, and then decided to meet up near my home for a familiar run down old Route 66.

Technically, the Mother Road began at the intersection of Jackson Boulevard and Michigan Avenue in downtown Chicago. Me, I’ve always picked it up from Joliet and turned around in Pontiac. It’s a nice little day ride for motorcyclists. I’ve written about various aspects of this little stretch of the Mother Road before and for the sake of not being redundant, I strive to share some different angles each time. Please, enjoy the ride…

After meeting up with Mark and part of his family near my home in Plainfield, we picked up old Route 66 in the city of Joliet, as part of modern day Illinois Highway 53. As we rode out of Joliet and south toward Elwood, I thought about my mother-and-father-in-law, who drove out to California via Route 66 on their honeymoon, back in the late 1940’s. While on their trip, Jack (my father-in-law) shot some footage using an 8mm move camera that he had. Some years ago, as a gift, my wife and I had the films transferred onto VHS tapes, the modern technology of the day. I enjoyed watching all that footage and listening to my in-laws tell stories about their trip. That experience is what sparked my genuine interest in the Mother Road. Prior to that, Route 66 was just the name of a TV show from the 1960’s when I was growing up.

The first time I ever ran this part of Route 66 was via motorcycle, following a gentleman named Jim, who had ridden the entirety of the Mother Road on an organized tour. Jim took great pleasure in sharing this local portion of Route 66, from Joliet to Pontiac. He frequently included a stop at the Abraham Lincoln National Cemetery in Elwood, to which he referred as his future home. We briefly rolled through the cemetery on this run, but did not stop and took no photographs. I will say it’s a solemn site to behold.

Where we did begin taking photos was in the town of Gardner, which is home to two structures of historic significance. One is a two-celled jailhouse that was built in 1906 and used until the 1930’s. The other is a streetcar-style diner that has been preserved and donated to the town. I had been to the jail once before but for some reason hadn’t walked over to look at the diner. Both structures are worth stopping to see.

We also stopped at a restored Standard Oil station outside of Odell. This is a must-see for anyone into historic filling station architecture. I should also point out that there is another significant gas station in Dwight. Although that one isn’t as architecturally interesting as this Standard station, it holds its own place as the last operating Texaco station on Route 66.

There is another interesting stretch during which you will see segments of an older road running parallel to the current two-lane blacktop. That’s the original Mother Road and there is at least one spot where you can legally pull onto a piece of it and take photos. There is an old barn off in the distance with a Meramec Caverns ad painted on the side of it. We didn’t stop this time but it’s there and you’ll see it.

I frequently conclude my excursions on this portion of the Mother Road at the Route 66 Association of Illinois Hall of Fame & Museum in Pontiac. It’s worth stopping for, if you’re at all into this sort of thing. With two floors of exhibits inside and a few goodies outside as well. Check out the VW bus as well as the hippie land yacht that once belonged to the late artist Bob Waldmire. Or the 1960’s radio station replica. Or the 1940’s home display. I just eat this stuff up every time I go there.

It’s not that there isn’t more to see further downstate — or across the rest of the USA to California, for that matter. I’ve seen other bits of historic Route 66, including an excellent museum down in Lebanon, MO. But the stretch of it that I’ve described here is my little bit of old Route 66.

Before heading back toward home, my friends and I walked over to the square in downtown Pontiac for a bite of lunch at the Acres Inn. Although the dining room was closed due to pandemic precautions, they did offer curbside ordering and outdoor seating. For a relatively small café and beer bar, Acres Inn offers a nice variety of items on their menu. I thoroughly enjoyed my smashed double cheeseburger, accompanied by house-made potato chips — I’m a sucker for homemade chips — and washed down with a lovely craft lager.

The sun was shining and there was much laughter in the air as we enjoyed our meal together. After that, we walked back to the bikes, rolled out toward Interstate 55, and headed for home. Before the rest of my group peeled off, a couple of exits before mine, I immersed myself in the sensations of riding the open road on a sunny and warm afternoon realizing that Mark had been right all along. It really had been an exceptional day to ride.

As always, thanks for hanging with me. 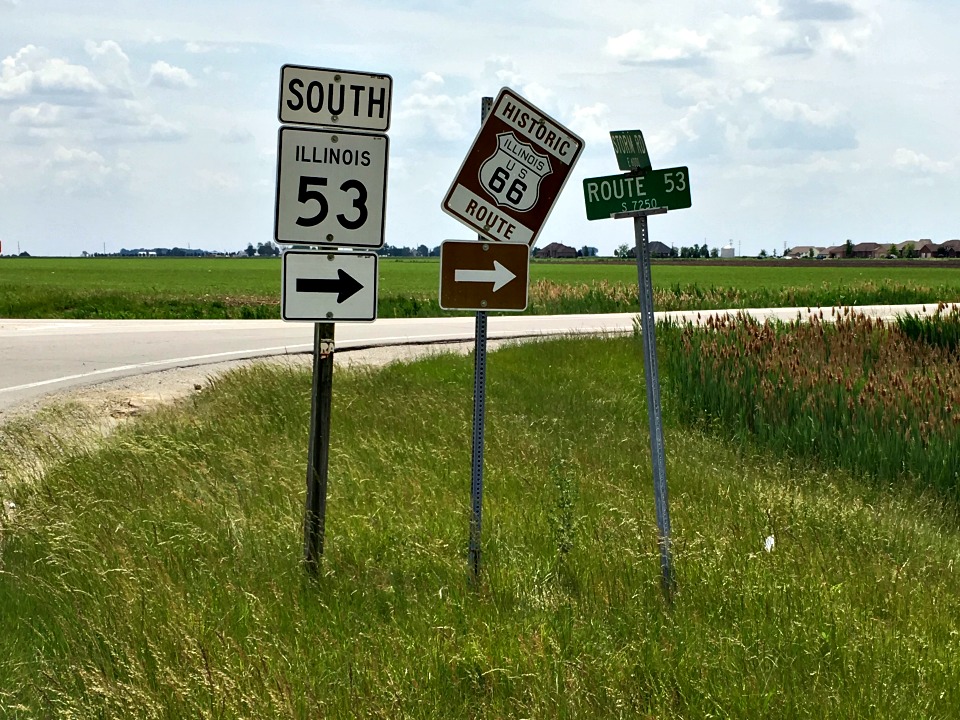 I had the bike out again today, alone, and decided to revisit a few of my favorite stops along the Illinois portion of historic Route 66. I wasn’t out nearly as long today as I had been yesterday, only 130 miles versus 216, but I still had fun. On the one hand, I did not get rained on, but on the other, it was much warmer today. 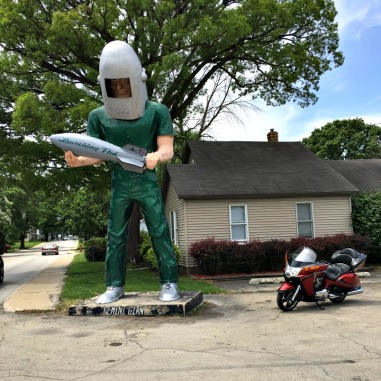 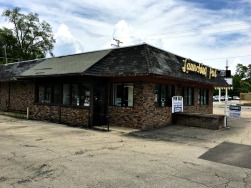 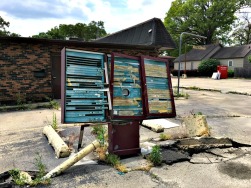 I picked up the Mother Road in Wilmington, a little ways south of Joliet. In so doing, I passed up the pretty cool Joliet Area Historical Museum and Route 66 Welcome Center in Downtown Joliet. I did this primarily because I was out to put miles on Miss Scarlett before her 50K service tomorrow, but also because I was alone and prefer to visit museums and such with others. If you haven’t been to the welcome center, do check it out—it’s worth it.

I did make a point, however, of pulling off at the site of the former Launching Pad Drive-In, which has been shuttered since 2010. An attempt to sell the property at auction did not go well and the facility continues to deteriorate. This does not stop visitors from stopping to take photos with the Gemini Giant, one of several fiberglass muffler man statues that can be found along Route 66 and elsewhere. Once, several years ago, my son and I stopped to visit the Gemini Giant and found a sizable group of touring motorcyclists, all on Harley-Davidson bikes. When we got closer to the group, we realized they were all speaking German. I invited my son, who had taken four years of German in high school and even toured Germany in his senior year, to strike up a conversation with some of them, but he declined.

Continuing south on Illinois 53, I passed the Polk-A-Dot Drive-In, a genuine Route 66 establishment in Braidwood, Illinois. I had just been there for lunch less than a week earlier, so I did not stop today, but I highly recommend the Polk-A-Dot as a place for photo opportunities, classic drive-in fare,  and ice cream treats.

My next stop was in Dwight, first at an historic Texaco gas station which doubles as a visitors center and then at a real gas station just up the road, because Miss Scarlett had gotten quite low on fuel. The Texaco station is a neat little place to stop. Make a point of talking to the volunteer staff. They tend to be friendly and knowledgeable, as well as helpful.

​
From Dwight I rolled on to Odell, where one can find a remarkably well-preserved Standard Station. On the way, I stopped twice, once to shoot a photo of an old barn with a Meramec Caverns ad painted on it and once to shoot some video showing a segment of the original roadway that was once U.S. 66, which shows up between the frontage road, which traces Route 66 and Interstate 55, which essentially replaced it. I apologize for the horrid audio quality of the video. The wind had really picked up during that part of the afternoon.

I opted to turn around after I got to Pontiac, home to the Route 66 Association Hall of Fame & Museum. I have visited this museum several times and will gladly do so in the future. I did not stop today because time was running short and, well, I was alone. But do make a point of stopping here. Don’t forget to look behind the building as well.

The last photo I snapped today was while I was stopped for a freight train on my way out of Pontiac. There I saw a sign that I had been seeing at railroad crossings all along my trip southward on old Route 66. “TRAINS MAY EXCEED 80 MPH,” the sign cautioned. Indeed, the train for which I had stopped was hauling at a high rate of speed. I didn’t know they could move that quickly, nor have I any clue when they began doing so.

Once I got back out to I-55, I pretty much high-tailed it home, where I drank copious amounts of cold water and promptly fell asleep. It had been a good day.

In all probablility, the next post I write will be from the road. My Rendezvous Run is just around the corner. Thank you, as always, for hanging with me.