Located on Illinois Route 84 near the southern edge of the city of Savanna, Poopy’s bills itself as “Illinois’ Biggest Biker Destination” and for good reason. The place is huge. The place is fun. And the place has earned its reputation as a worthy venue for motorcyclists to visit for food, beverages, and a wide variety of entertainment. Its owner, Kevin Promenschenkel, earned the nickname “Poopy” at a young age when a wayward bird let him have it, twice, during a Little League baseball game. The name stuck and the rest, as they say, is history. 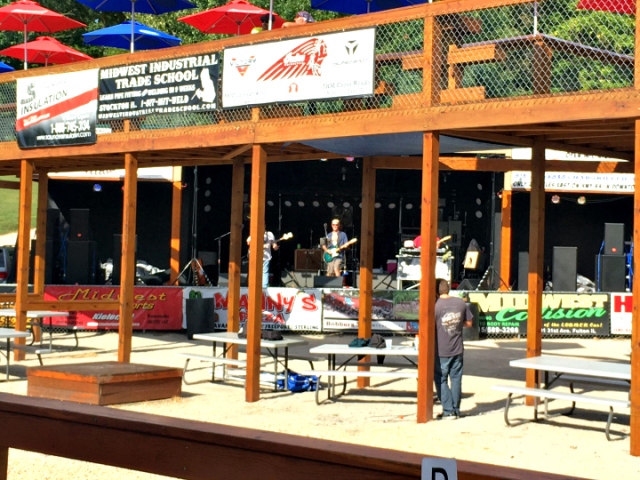 Well it seems history is being made again. Promenschenkel has been busy doing everything in his power to keep his business afloat during these trying times, including participating in a lawsuit against the state, asking his loyal customers to support him by ordering Poopy’s merchandise online, and most recently, opening the venue for Memorial Day weekend — a major weekend for his business, filled with events and entertainment. This was a violation of our governor’s current stay-at-home order, but with the support of county and local authorities, not to mention many loyal bikers who came from miles around, Poopy’s did indeed open. In addition to all this, a motorcycle fundraising run has been organized to provide direct relief to Poopy in this time of need.  I intend to participate in that fundraiser, assuming Mother Nature cooperates and I have people willing to ride out to Savanna with me. I am doing this not because I have excess cash to give away but because I have a great deal of respect for Kevin Promenschenkel, am sympathetic to his situation, and feel compelled to help him out in this small way.

I’ve been stopping at Poopy’s since September of 2011. That’s the year my son went away to college in the Quad Cities area. A week or two after he left, I found myself missing the kid something awful and so decided to pay him a visit. My ride at the time was a silver metallic 2007 Honda ST1300, a sport touring rig that made short work of my 130-ish mile run out to the Mississippi River. After picking up my son, I asked if he had any interest in checking out this “Poopy’s” place that we’d heard others talk about. At the time, he wasn’t yet old enough to have anything stronger than a coke but the allure of visiting a real biker bar must have pressed his button that day. “Sure!” my son exclaimed and within minutes, he was onboard and we were headed north toward Savanna.

I should pause here and mention that Poopy’s is anything but a typical biker bar. Poopy’s is a destination, an experience unto itself. Sure, it has a bar — several, in fact — plus a restaurant featuring numerous namesake-themed items (e.g. “The Big Poop”), a gift shop, a parts counter, and more. They even had a tattoo parlor on the premises back when I first began going there. The outdoor portion of Poopy’s includes a sizable entertainment stage with overhead catwalk, a pool bar, even a campground. They host vehicle shows, combat sports events, and many, many concerts. As I said, Poopy’s is an experience unto itself and I have developed a deep sense of appreciation for this venue — and the man who built it — from the first time I set foot on the premises.

My son and I had ourselves a grand old time that day. Using my phone, our waitress took a great photo of us while we waited for our lunch. We walked the premises, admired the unique decor and ambiance, bought a few souvenirs, including my lucky Poopy’s bottle opener, and vowed to return.

And so we have returned a number of times. Not nearly often enough, because I don’t live nearby, but whenever the opportunity presents itself — and always with friends. I’ve made lunch stops, brunch stops, and “you just gotta’ come and check this place out” stops. And Poopy’s never disappoints.

My last trip there was a few years ago. My most favorite pillion companion in the world and I had ridden out to Iowa over Labor Day weekend to meet up with some friends from a few different states. During a wonderful all-day ride that we took, the group  had planned to visit Poopy’s for a mid-afternoon lunch. As we approached and entered the parking lot, my beloved friend rolled video, creating a very nice memento. We sat outside for quite some time, enjoying the live music, good food, and each other’s excellent company on that fine late-summer afternoon. Indeed, it’s been too long since I have enjoyed such a time at Poopy’s. 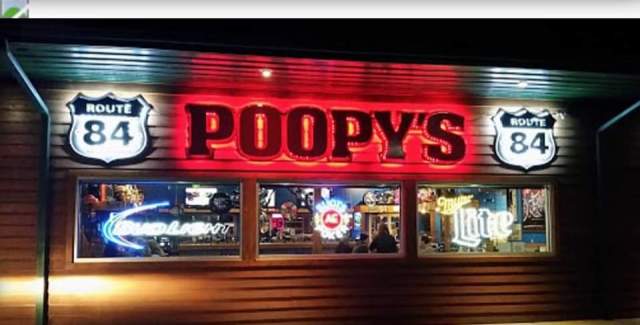 And so on Saturday, June 6, 2020, I hope to join whatever companions I can assemble and ride west for the day. My motives have been questioned on several counts by different individuals. Without naming names, here are their questions and my answers.

In the end, I think it would be a dirty shame if Poopy’s were to disappear as the result of this horrific pandemic event and the shut-down of our economy — indeed of our society as we know it. I’m sure many businesses will not return as the result, through no fault of the independent owners themselves. So if I can help out one of them, this one in particular, by riding with friends for a few hundred miles on a Saturday and dropping some money in the till, I will gladly do so.

Whether you agree with me or not, I respect you for having read this far. And as always, thank you for hanging with me.