Sounds like a good title for an article about global warming, right? I assure you I have no such lofty ambition. But it was an unusually warm, sunny day here in Chicagoland today and with very little residual salt visible on the roads to deter me, I decided to take Miss Scarlett out for a run.

First I had to clean her up a bit, as I have yet to put my dust cover on the bike this winter. I use a product called Plexus on my windshield. It’s a very effective cleaner, leaves a protective coating behind, and does not have a yellowing effect on clear plastics.  For all the bodywork, my favorite product for years has been Original Bike Spirits Spray Cleaner and Polish. As waterless detailing goes, these two products have given me very satisfactory results.

After a quick check of my tires and air suspension pressure, I disconnected my smart charger and fired up the bike. Sweet music indeed! I suited up and took a shakedown cruise through the neighborhood—always a good idea after spending more than a few weeks off the bike—before heading southwest toward Starved Rock State Park, a major attraction in the state of Illinois.

Major attraction indeed! The large parking lot by the Visitor Center was packed, with cars illegally parked along the outer drive lane. Later on I discovered, on my way out of the park, that the overflow parking lots had gotten pretty full as well. Ah, but what would one expect on such a beautiful day? 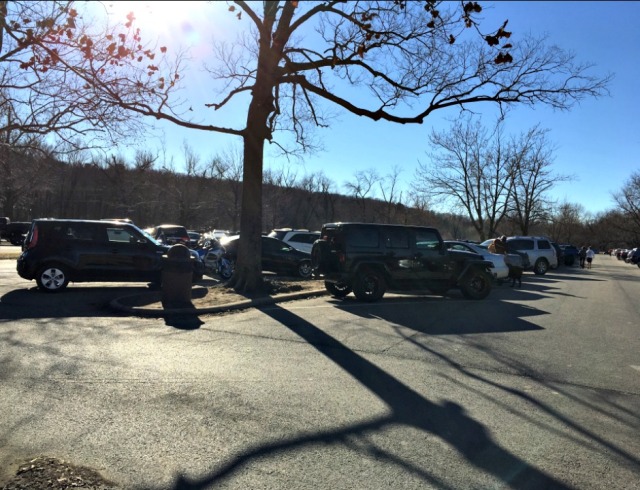 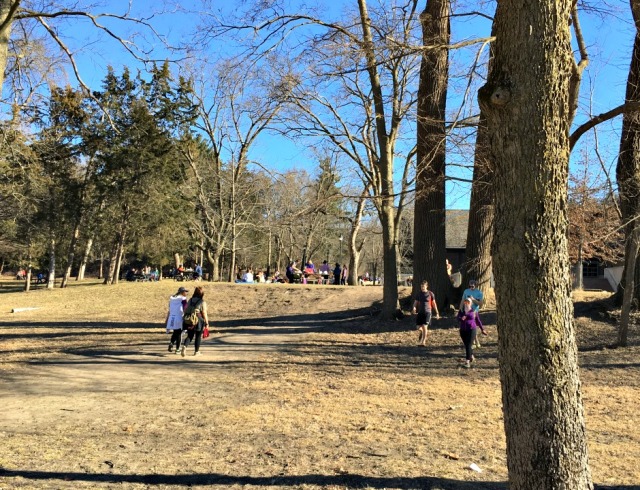 I don’t consider myself a good “alone” person, but today, following a rather trying week at work, I was in serious need of this wind therapy and personal down time. As I rolled along Illinois 71, between Yorkville and Ottawa, I left all the stresses of the past week behind me. Once I had gotten to the state park and began my ascent to the top of Starved Rock, I had let go even more. By the time I’d reached the summit huffing and puffing, I’d forgotten  what I was so stressed out about.

I walked around the top of Starved Rock for a while and then walked to the end of the paved walking path before returning to my bike to head home. Under other circumstances, I might have been less than pleased about the number of attendees present. Instead, every time I passed a squirming rug rat or an errant dog,  I smiled from within, only too happy to have walked amongst all this humanity.

I’ve been coming to this park since I was five, maybe longer. It’s beautiful. If you live in the region and you want to see something cool, please check this place out.

Today I came to a realization regarding our moral, ethical and political ideologies.

Recall the poem “The Blind men and the Elephant” by John Godfrey Saxe. Six blind men are examining an elephant and each is adamant of his experiential findings. The last verse says it all.

And so these men of Indostan
Disputed loud and long,
Each in his own opinion
Exceeding stiff and strong.
Though each was partly in the right,
They all were in the wrong!

Now before you go any further, examine this bit of reflection from—of all places— a 1966 western movie, The Professionals.

“Maybe there’s only one revolution, since the beginning, the good guys against the bad guys. Question is, who are the good guys?”

And therein lies the rub. Aside from the fact that we each approach the current situation in Washington wearing the filters of our respective human experience, we also approach one another with conflicting understandings of good versus evil. From this perspective, we come to debate and argue, each with the intent of winning over the other guy. And for the most part, each will fail.

We can’t even agree on right from wrong! And in our efforts to win each other over through seemingly benevolent discussion, we vehemently entrench ourselves ever deeper into our private realities, ever bending our arguments to protect what is ours, rather than admit it might not be entirely accurate. Nice going.

I knew we were in trouble when I saw the exact same news story concerning President Trump being shared on Facebook by both a pro-Trump advocate and an anti-Trump detractor. The same story! And when I realized they couldn’t both be right, it occurred to me that the only sure thing in this equation was the conflict itself. That was real.

Wake up. You cannot win with the arguments you are making. In this regard, you are no better than one of the blind men in that poem. In fact, you are worse because at least the blind men were all of a like mindset.